Now look at that, I managed to make a comeback with the interviews in a fairly reasonable time. Anyway, this time I talked to Francesco Liccari. 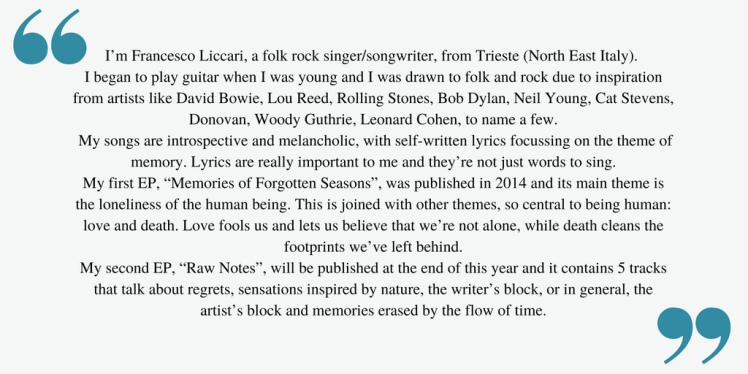 You can find him on:  Twiter | Facebook | YouTube | SoundCloud | Bandcamp
Q: When did you start making music and why?
I started making music in 2008. Before I was playing only covers. I’ve begun to write my own songs because I liked to write lyrics and poems and also to write music, so I’ve tried to put things together and so I started writing songs.
Q: You write your own lyrics, where do you get the inspiration for them?
Not an easy answer. I get the inspiration from things outside or from what I have inside. Some lyrics talk about how I see the world and how I feel my role in it, some are tales inspired by people I’ve known, some are just reflections about love, memories, time, life and death.
Q: What would you say is your most successful song so far?
For me “Sad-Eyed Lady” but maybe for the audience, it is “What Is Love (He’ll Never Know)” or “A Song For a Man”.
Q: If you could work with any musician, with who would you want to work and why?
Dead or alive? Dead: David Bowie, he was my hero since when I was a child and he was one of the most eclectic musician I’ve heard. Alive: Bob Dylan because his songs give me the starting inspiration to begin writing my own music and so it would be fantastic to write a song with him or to work with him. And if I can add one more alive musician, I’d like to work with Philip Glass, I like very much his minimalistic music that has inspired a lot my perception of music and my way of composing.
Q: What would you say is your biggest achievement (in life and music) so far?
My biggest achievement is to never give up. So, for example, I got my master’s degree in biology without putting aside music. And now I'm going to get my biggest achievement in music or at least I’ll try.
Q: Who is your biggest supporter?
My biggest supporter? Hard to say, there is more than one: my family, my girlfriend, my friends and they’ve always helped me a lot, and if I have never given up it’s because of them.
Q: Is there anything you’d like to add?
I’d like to thank you for the interview and I’d like to thank anybody has listened to my music and that has helped me to get known. Thanks to all!